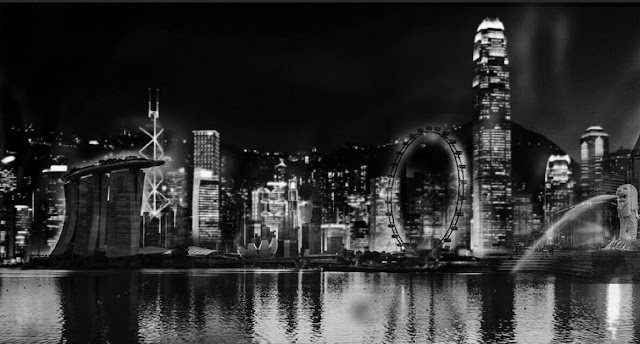 EXCITING NEWS! Announcing the first twin cinema collection in the world, and the first collection of original English-language poetry by poets from Hong Kong and Singapore!

Perhaps Hong Kong is a city of cinema. From the neo-noir neon stylings of Ridley Scott's Blade Runner, to the stylised longing of early Wong Kar Wai, through the boom years of Cinema City and larger-than-life film stars, she has played host to countless cinematic moments with her cosmopolitan beauty.

And perhaps Singapore is a city of form. Structure drives everything in this rigidly planned city-state—traffic lights and electronic road pricing and meters and out-of-bounds markers; a system that runs like clockwork; and a citizenry nominally cultured in conformity. The city contains multitudes from every race and creed, yet in our lives we strictly colour inside the box, queue wordlessly around the block and stand behind the yellow line.

Combine the two, and what do you get?—The twin cinema.

The twin cinema is a rigid, yet spectacular poetic form that mixes constraint with possibility. Its twin columns can be read vertically down as discrete poems, yet you can also hop across the space between skyscrapers and find meaning that bridges the gap horizontally for each line. It can be used to contrast two opposed points of view, or find a common bridge across a seemingly insurmountable gap—juxtaposition, after all, is at the heart of modern cinema. It was coined by the Singaporean poet Yeow Kai Chai.

In this project edited by Tammy Ho Lai-Ming (founding co-editor of Cha: An Asian Literary Journal) and Joshua Ip (founder of Sing Lit Station), poets from the twin cities, Singapore and Hong Kong, will tackle the challenge of the twin cinema form in tandem with their own interpretation of the ties that bind or divide the two. We share some links of cultural heritage, postcolonial history, rich financial centres and trading ports with the hectic life that follows, and also the sense of a hinterland yawning just across the water. Yet we also rival each other in numerous fields, and are divided by language, by geography, and political affiliation and situation. This is fertile ground for poetry—and may it grow cities.

We will be opening for submissions from now until Saturday 3 June 2017. Submission details are available here.

CONTENT AND FORM . // All poems submitted should be  twin cinema . The rules of the form and some examples are available  here . Poets may submit either original twin cinema (where the twin columns are meant to be read vertically separately) or modern twin cinema (where the twin columns can be read both horizontally across and vertically), or variants on the form as bounded by the limits of their creativity. // The collection aims to engage with the rich connections and contrasts between Singapore and Hong Kong, and build poetic bridges between both cities. Poets are encouraged to reach out to their counterparts in the other city to learn more, or even engage with the urbanity and idiosyncrasies  of the other city in their work, but we will not further constrain the content beyond the form. . . SUBMISSION DETAILS . // The open call will run from 8 Apr 2017 to 3 Jun 2017. // Poets should send a maximum of five pieces each. // Submissions should be sent to twincitieshksg@gm
Read more